The Day After Joomla 4.0 - Planning the Future

With Joomla 4.0 beta being released a few weeks ago, we enter into a phase of stabilization. Joomla! 4.0 is feature complete, that means, no new features are going to be added to Joomla 4.0. The focus is on fixing the last bugs to get Joomla! 4.0 out as soon as possible.

But what will happen until the release and afterwards? Obviously we don’t want to stop new feature development, which is why we would like to refine our development strategy for upcoming versions. Whenever we start the work on a new minor version, we plan to define the subsequent two minor releases This results in a more reliable release cycle and a more consistent road map.

In general, our development strategy stays the same. As we have strived for in the past, we want to release a new minor version every 6 months. For example, 4.1 should then be released 6 months after 4.0 and Joomla 4.2 another 6 months after. This however results in timing issues, Realistically, a new feature would have to be ready and merged 3 months before the actual release in order to iron out all bugs and test it properly.

What does that mean? If we start the development of new features after the latest minor version has been released, we have less than 3 months left to finish everything. That is in most cases not enough to implement bigger functionality. So the plan is to have a jump start and define the base features for the next two releases while the current development version is in beta state. Concurrently we also plan to start the development process of aforementioned features.

More specifically, we’re going to develop more than one minor release at a time. In fact we have started development on Joomla! 4.1 already. That gives us a little bit more time to work on bigger features for a minor release.

We will announce the features of a version in time, as well as the responsible Release Lead, who manages the development and maintenance of a version. Following the announcement every developer is welcome to join a prepared working group in the Joomla! Enhancement Development Team and help to implement the planned features.

While we described the how, we now want to explain the what of features in new releases. Historically we had good experiences with a minor release which is related to one major feature and maybe a few smaller ones. Think of the GDPR features of 3.9 for example. We want to build on this experience by defining one major feature per minor release. We then also want to define approximately two additional features which generally improve Joomla.

Additionally every minor release should also work towards the identity of Joomla!: We consider Joomla to be at the front of the list of accessible CMS and to be a runner-up in being very usable for the end-user. To improve on these qualities, we want to work on at least 5 accessibility improvements and 5 useability improvements for every minor release.

Of course that does not mean that minor releases are limited to this defined structure. You should see the approach as the absolute baseline of the future. So if you have your own idea and functionality to implement, feel free to get in touch with us and we for sure are open to additional features from the community. We are investigating/considering a more structured way of contributing and discussing ideas. More to follow. 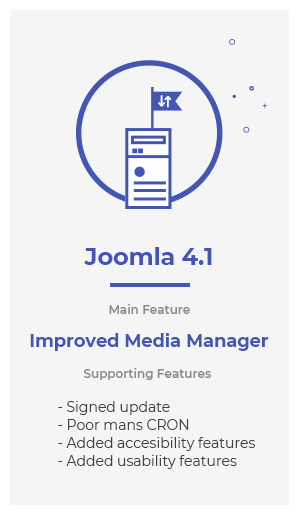 With Joomla! 4.0, a completely rewritten and better version of the media manager was implemented.The major feature of Joomla 4.1 will be an even more improved media manager. Right now the media manager is mainly used for uploading images, but we want to extend it to a true media managing facility. Consider image management with different sizes and metadata, handling and specifically playback of video and audio and support for documents.

Currently Joomla! Updates are not secured by signatures. Signing Update would ensure the legitimacy of the installed update. We plan to implement The Update Framework (TUF), a heavy security improvement by delivering signed updates to make sure that no contaminated version of Joomla! and its extensions is installed.

There are some hoster which do not offer server cron jobs, so we want to implement an internal cron job system. See: A first implementation is done here which could be a base for further enhancements https://github.com/joomla/joomla-cms/pull/25022.

The following accessibility features are planned:

The following usability features are planned: 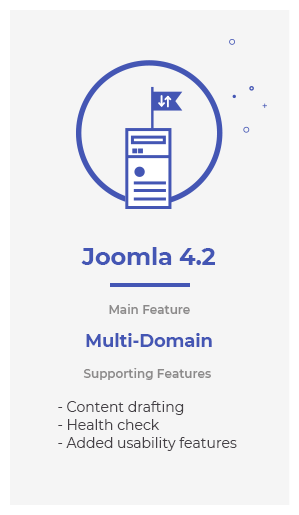 For Joomla! 4.2 we have a rough idea about the main feature, but some minor features are to be defined [TBD]. We are seeking collaboration with marketing and we would like to ask you as the community to give us your ideas and wishes.

Implement a multi-Domain/Site functionality into Joomla! we are forming the team at the moment, if you’re interested to help please contact the Multidomain working group.

Allows to edit/change content without publishing yet and publish it (e.g. via the workflow) later.

A page to check the integrity of your Joomla! files and database structure (also for 3rd party extensions).

Features to be defined

Please feel free to contact production department with any ideas

What happens with existing PR?
Joomla! 4.0 is feature complete, that means, no new feature will be implemented there. All open PR will be changed to target the Joomla! 4.1 branch

Is there a chance to implement new features not listed in the roadmap above?
Yes all community contributions are very welcome. The list above is a baseline we want to implement. So more is always possible.

When will Joomla! 4.0 be released?
The maintainer team has a clear message here.

We hope that this outlook into the future of Joomla has wet your appetite and makes you as excited as we are for what is to come. However Joomla is not a closed project. Joomla depends on the participation from all of us. So if you can help develop code, test features or find bugs, we would be glad to have you on board. And while we have been talking about future Joomla 4 releases here, this all hinges on the release of Joomla 4.0. If you want to help out, please contact the Joomla! Enhancement Development Team.